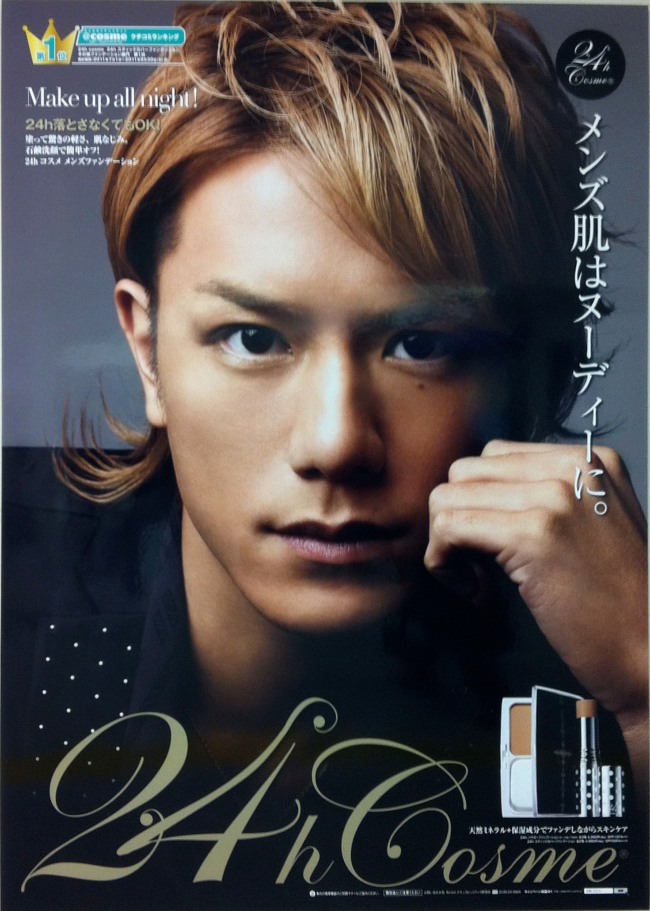 Ad for a line of foundation for men that lasts 24 hours before needing a touch-up.

Okay, before you step into that steaming pile of sexist doo-doo, why not? Why shouldn’t men be able to cover up that unfortunate red thing between their eyes, or disguise the reminders of their teenage acne battle, just like women do?

Sure, we’d all like to be so naturally gorgeous that we don’t need any help from no stinkin’ cosmetics conglomerate. But come on, the handful of people who can get away with that get paid the big bucks to glower from Abercrombie & Fitch bags, and then only after rigorous Photoshopping.

Most of us don’t get up in the morning and break out the purple glitter eyeshadow, but we do put on a ton of makeup to make us look like we’re not wearing any. So why can’t men do the same?

To be fair, this is more of an option for Japanese men, who are less likely to be sporting a five-o-clock shadow by quitting time. And note that the major selling point of this brand (24 hour Cosme!) is that you don’t have to run off to the men’s room every few hours and get caught by your boss, touching up your makeup in the mirror…

Here are all four of the ads touting the idea that men ought to be able to make themselves just as beautiful as women.