Home » Awesome Stuff To Do » The Best Tokyo Illuminations 2017

Posted by Jonelle Patrick on November 20, 2017 in Awesome Stuff To Do, Just...Beautiful, Seasonal Goodness | 6 Comments

It’s time again for the best free holiday light show ever! Here are this year’s Tokyo Illuminations offerings, some of them even better than before: 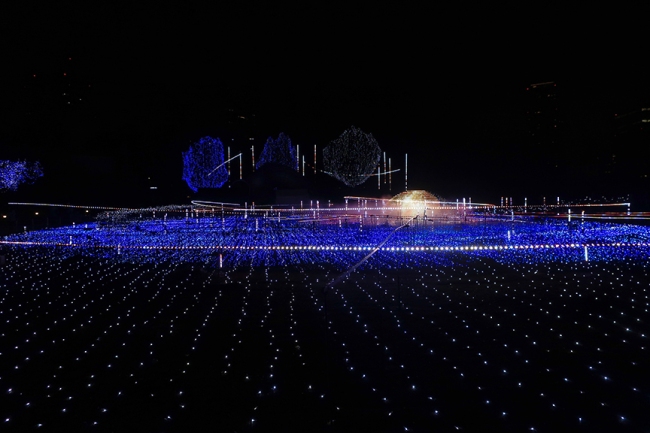 This one is from the “Venus” themed show, which is the Friday offering

This year’s “Starlight Garden” extravaganza is super lavish, with different shows for each night of the week. There’s a four-minute blue and white spin around the galaxy, then each day of the week features a visit to a different planet in our solar system (except Uranus  and Neptune, which are skipped in favor of our nearer and more instabae neighbors, the sun and the moon.) Note: this day of the week thing sort of confuses me, because that’s what they say on their website, but I went to see it on the first Wednesday, and it seems like they cycled through all of the planets, so go figure. Anyway, here’s the line-up:

For Mondays, the LED animation of the moon depicts the moment it covers the sun during a solar eclipse 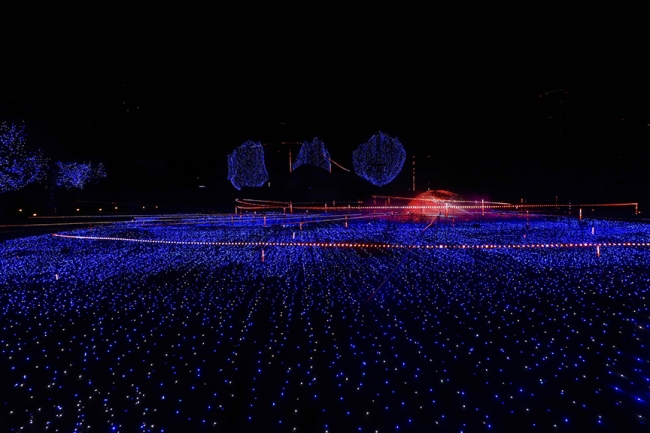 Jupiter is the planet of Thursday, with a “typhoons & aurora” gas planet-ish theme 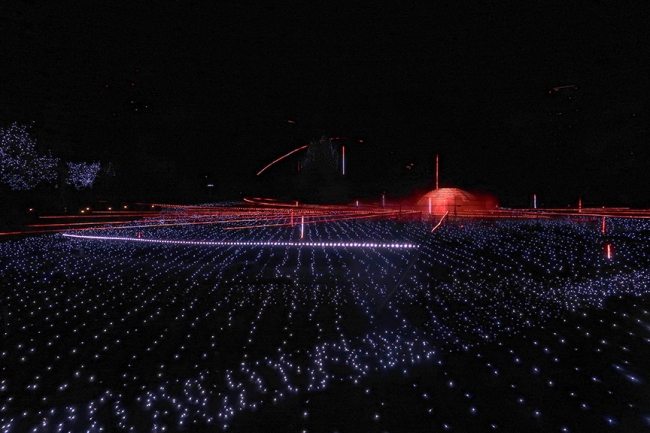 I don’t seem to have any photos of the Saturn piece (dang!) but the Sunday one was pretty great, with a bunch of rays flashing out from a burning red Sun

Once again, this mesmerizing field of lights is set to a spacey soundtrack and features fog as well as super-choreographed animation 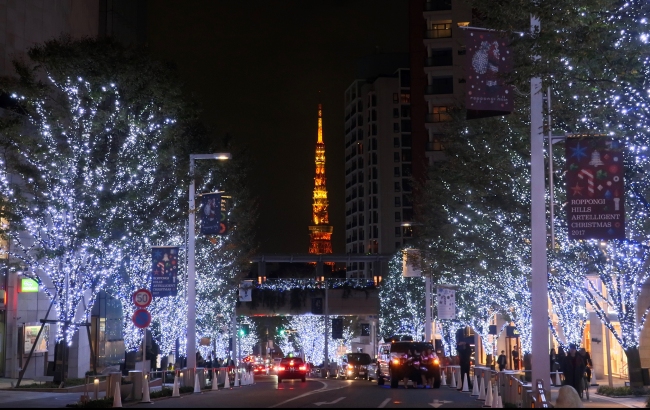 Here’s what it looks like most of the time, a mix of “Snow & Blue” 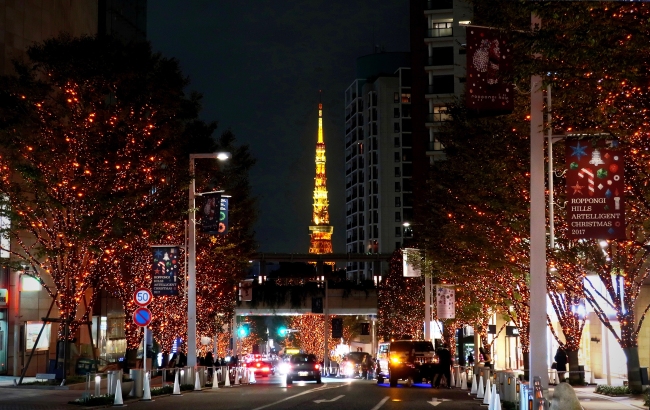 But for ten minutes of each half hour, it switches to “Candle & Amber”

Over at Roppongi Hills, the display of lights on Keyakizaka-dori is always festive (and definitely instabae). The best place to see the promenade (and get a view of Tokyo Tower) is from the bridge over the street by the Louis Vuitton store.

Here’s the schedule for when it changes colors:

NAKAMEGURO JEWEL DOME is back! 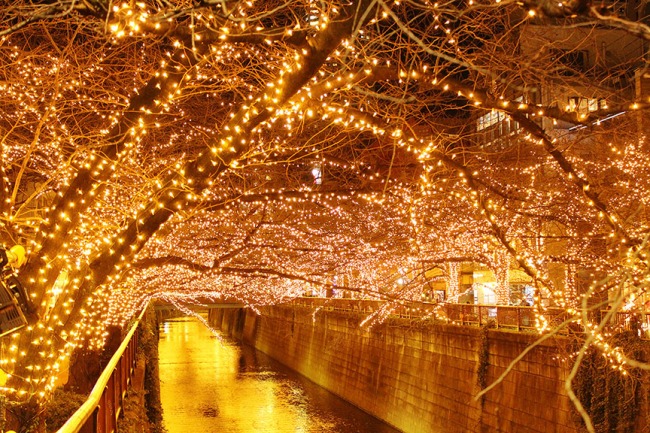 Photo thanks to Cafe Nesto 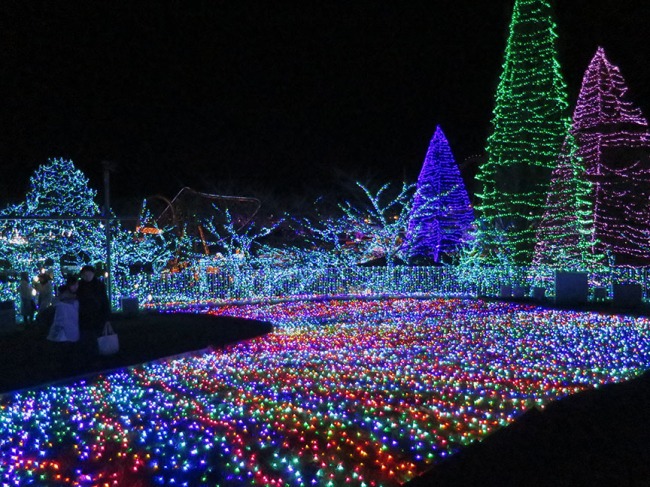 Colored lights and lots of ’em make it worth the admission price to the old Yomiuriland theme park, even if you never go on a single ride. 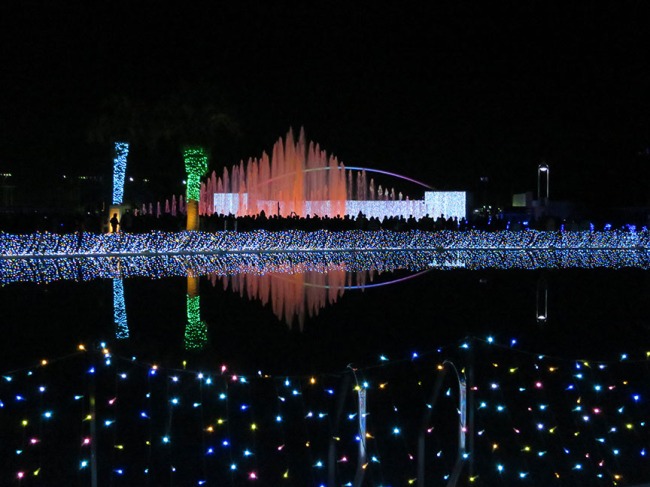 The ginormous reflecting pool stage offered three different shows (rotating every fifteen minutes at :00, :15, :30 & :45) and the one I saw not only had colored dancing fountains (I’m a sucker for dancing fountains) but also dancers performing in silhouette (ditto for suckerhood). 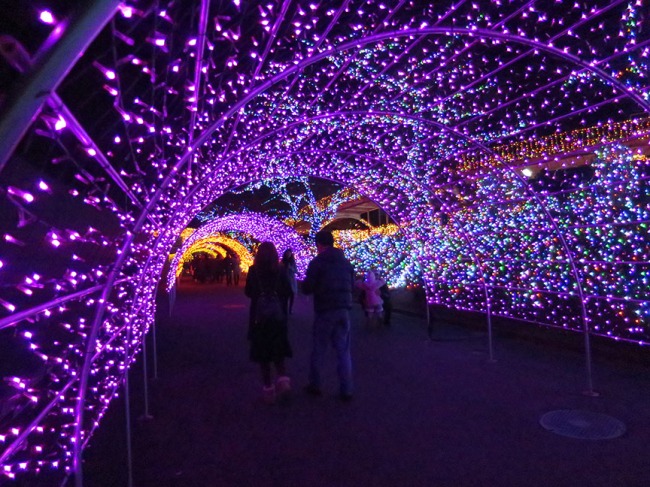 Tunnels like this pulse with an every-changing light show

Getting to Yomiuriland is always a bit of an undertaking, but trust me, the illuminations are worth it! It takes hours to walk around and inside them all, and the quality does not disappoint. They definitely did not stint on the electrical outlay, and it’s seldom crowded. Even if you don’t go on any of the rides, it’s worth it.

This dome puts on an everchanging light show

You can see it from up above…

…or sit beneath it for the full psychedelic effect 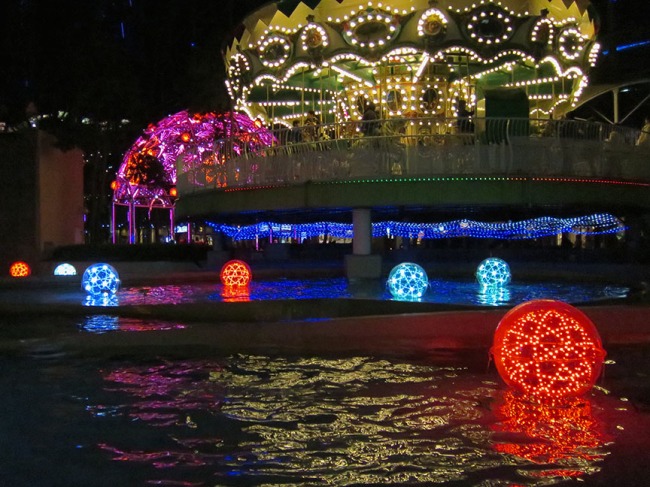 And DUH it’s an amusement park, so if you dare to risk freezing your patootie off, you can ride the splashy one through the illuminations at night 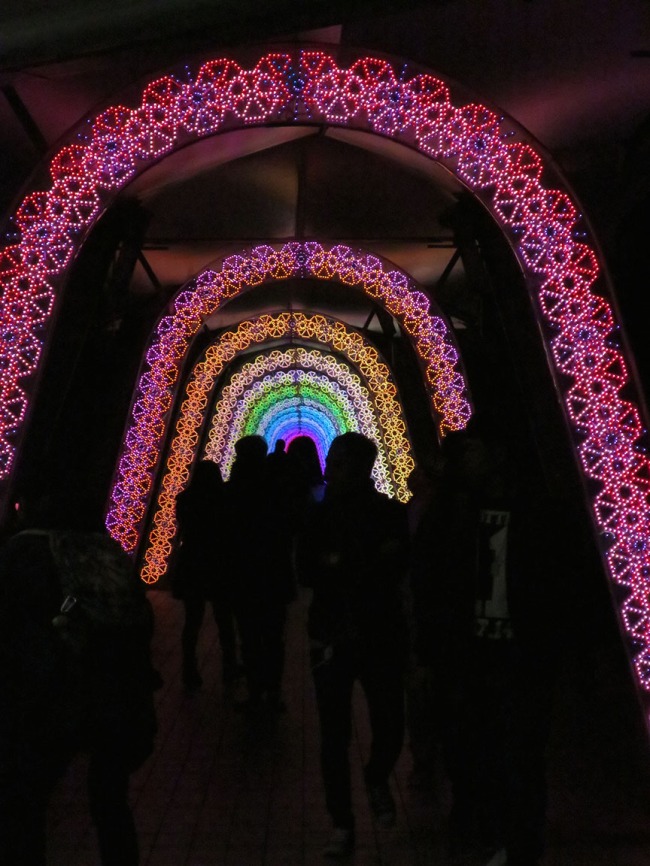 The Tokyo Dome City amusement park puts on a lights and fountains extravaganza every year, and you don’t even have to pay for any rides to enjoy it!

Every year, the Shiodome courtyard is transformed into a fantasy landscape of starry blue lights that periodically burst into dancing colored lights synced to music

This is the artists’ rendition of what this year’s theme will look like (although I just saw a post from a friend who went to this, and the “candalabra” things aren’t gold, like they seem in the illustration – they’re blue)

This year’s illumination at Shiodome Caretta has a “Beauty and the Beast” theme, and if you can get past the blatant Disneyfication, the candelabra/banquet hall motif will be projected around the usual entertaining landscape of animated LEDs and music. In between shows, you can line up to get your picture taken in front of that central tree.

The trees lining the promenade between Shinjuku South-East Exit and Times Square are strung with lights, and Mosaic Street (the walk that goes through MyLord) is decked out in pink “sakura” lights this year.

While you’re out ogling the new Gundam robot in Odaiba, stop by the VenusFort mall (that eerie Caesar’s Palace lookalike!) to see the holiday snow crystals and stained glass-themed projection mapping show.

Noon – Close (projection mapping shows start every half hour at :00 and :30) 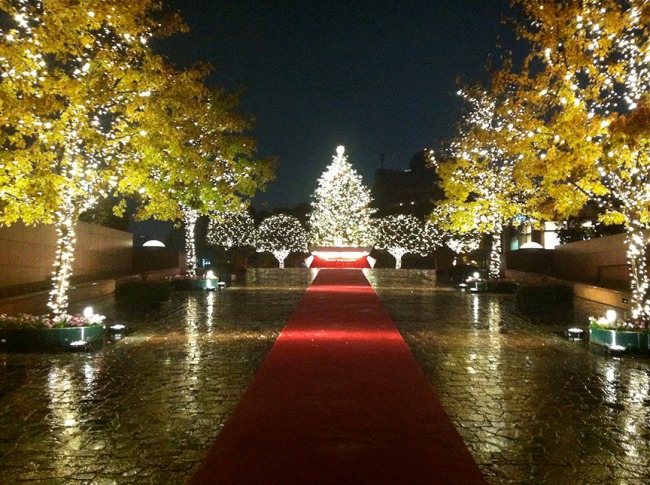 This display doesn’t change from year to year, but if you haven’t been there, the view from the red carpet that leads from the Christmas tree to the gigantic Baccarat chandelier is worth seeing once.

Hillsides covered with lights, as far as the eye can see 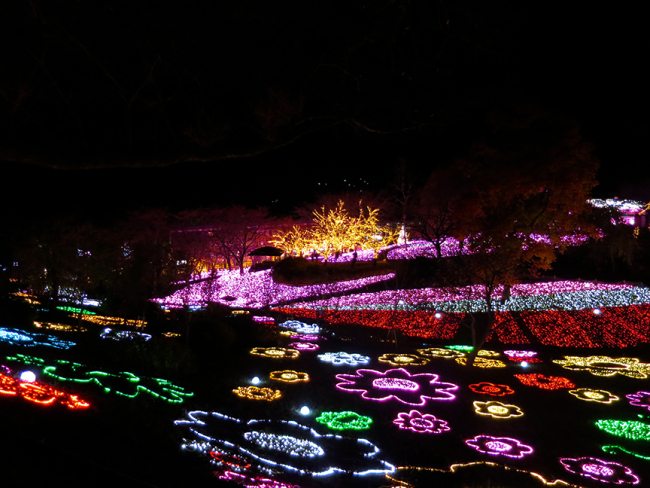 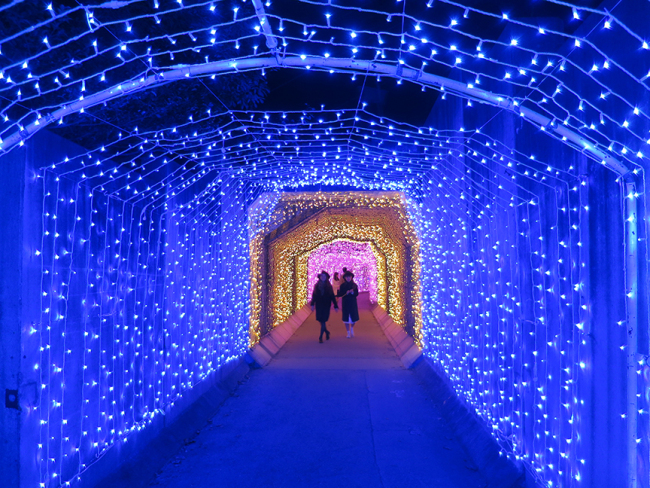 They got tunnels too. Ever-changing light-up tunnels

This place is a bit of a trek from Tokyo (it takes about an hour by train from Shinjuku Station, then a short bus ride), but if you love whole hillsides carpeted with lights, Sagamiko Illumillions is hard to beat. It’s pretty reasonable, too. Tips & tricks for getting there are here.

This year, the cherry trees are lit up with 423,980 pink lights (hey, it’s Japan, so of course they know exactly how many!) all along the Meguro River from Osaki Station to Gotanda Station, in an event they’re calling “Minna no Illumi.”