Outside of Japan, nobody has heard of shibazakura, but they should! Check out the rolling hills covered with pink flowers that bloom in the middle of May! (They’re actually a variety of phlox, so I’m guessing the “sakura” part of the name is a feeble-ish attempt to ride the coattails of Japan’s more famous flower season, but they DO deliver that pink cloud thing, even if you have to look down to see it.)

And the best part for Tokyo dwellers is that this year I discovered a place to see them that is a LOT closer than the more famous places (which involve daunting & expensive train schleps). Hitsujiyama in Chichibu is only a ¥1600 train ride from Ikebukuro Station!

Shibazakura bloom during the entire month of May. If you want to feast your eyes on their vast pinkness, a map is on my website, The Tokyo Guide I Wish I’d Had. I took the train (98 minutes from Ikebukuro to Chichibu Station) then walked to the park from there (it takes about 15 minutes). Admission to the shibazakura fields during the blooming season is ¥300.

It’s my new monthly newsletter, and it’s got all-new Japanatastic features you won’t see unless you subscribe, plus a chance to win a Japan-centric book.(And, of course, it’s free!)

(And just so you know, I hate spam too, so I’ll never share or sell your info.) 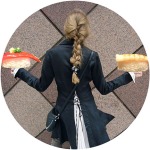 Jonelle Patrick writes novels set in Japan, produces the monthly newsletter Japanagram, and blogs at Only In Japan and The Tokyo Guide I Wish I’d Had

Awesome Stuff To Do, Beyond Tokyo, Just...Beautiful, Seasonal Goodness