I Would Not Want To Be That Rice

Posted by Jonelle Patrick on December 31, 2011 in Traditional Stuff I Love | Leave a comment 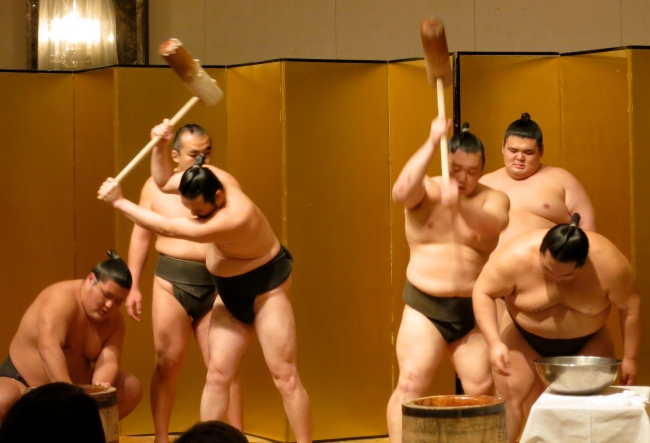 It wouldn’t be New Years in Japan without pounding down a stomach-full of mochi, and who better to bludgeon the rice into sticky submission than a cadre of sumo wrestlers? Today I watched as six mighty sumo-sans took turns wielding the mallet and flipping the doughy mass so no grain escaped the hammer of doom. This operation requires a fine sense of timing, because the entire blob of sticky rice needs to be deftly turned in between strokes, or the turner ends up with the mother of all smashed fingers.

Afterwards, we lined up for a taste of the proceeds, with a choice of toppings: roasted soybean flour, red bean paste, or grated radish. Gotta say, it was delish, and I didn’t find a single lump!