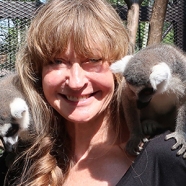 Mobbed By Lemurs At The Exotic Animal Petting Zoo!

Posted by Jonelle Patrick on October 13, 2017 in Animals, Awesome Stuff To Do, Beyond Tokyo, Just another day in Japan | 13 Comments

Who can say they never clutched the fence at their local zoo’s lemur exhibit and didn’t long to sneak over the top just for a few minutes (or, okay, in my case, A FEW HOURS) to cavort with those frisky, big-eyed, long-tailed cuties? Admit it – you’ve always secretly wanted to, haven’t you?

Well, now you CAN!

An hour from Tokyo Station by bus is a little private zoo deep in the heart of Chiba prefecture where you can go into the enclosures and pet all kinds of exotic animals. It’s called Sayuri World,* and it did not disappoint!

With their TAILS ( Lemur tails are the best tails in the entire animal kingdom. Except maybe for fox tails. In any case, they’re way up in the winner’s circle)

In fact, as soon as you step through the door with a telltale pink plastic bucket, it feels like cats are jumping onto your shoulders, but actually WOO HOO it’s LEMURS!

The capybaras were also friendly to bucket bearers

And the giraffes were equal opportunity carrot and banana eaters

There were also llamas, tortoises, deer, peacocks, guinea fowl and bunnies roaming around freely (and not above trying to cadge a snack).

Open: Every day, except closed on Thursdays

HOW TO GO TO SAYURI WORLD

• Get yourself to Tokyo Station and go out the Yaesu Central exit.

• You’ll see a bunch of buses waiting in an area right outside at street level, but those are not the buses you’re looking for. Cross the big street that runs in front of the station and you’ll see two bus shelters next to the curb.

• The one you want isn’t the first one that services Hokkaido Line buses, it’s the second one. This is what it looks like.

As you can see, there aren’t very many buses on that route, so I highly recommend you catch the 10:00 a.m. one. It’ll get you to Sayuri World very close to the 11:00 opening time.

Note: Getting there early is key, because once the animals have been offered snacks by a bunch of other visitors, they tend to retreat to their little houses to digest and aren’t so eager to have their pictures taken with you. Also, going on a weekday is way more fun than going on a weekend, because it can get so busy you have to stand in line to visit the animals. On weekday mornings, it’s great.

• You can use your Suica/PASMO card to ride the bus. It costs ¥1550 one way. Pay with your card when you get off at Ichihara-tsurumae Bus Terminal.  (Don’t tap your card on the sensor when you get on, just when you get off.) It’s the second stop on the route, and it’ll take about an hour to get there.

• The walk to Sayuri World from the bus stop is less than one kilometer (about 900 meters, takes about 10-15 minutes) and is gently uphill on the way there.

• When you get there (you’ll know, because it’s clearly marked), pay the admission fee at the reception desk and buy snacks to feed the animals. 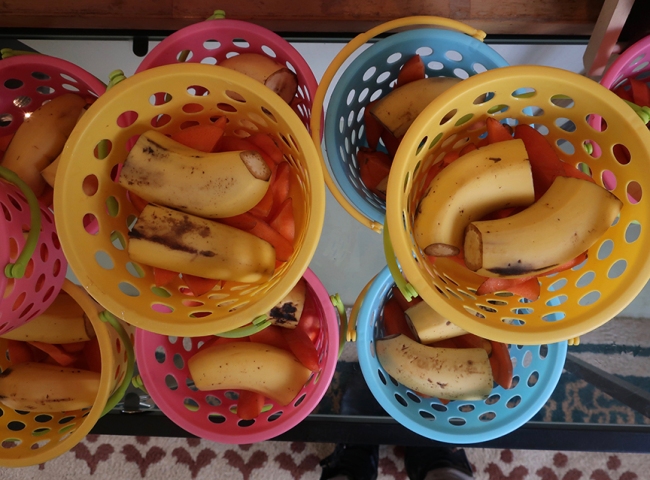 One basket costs ¥500. They will dump the carrots and bananas into a bucket with a lid, so you can carry them around and give them to the animals. I recommend getting a bucket for each person.

There are a few (common sense) rules that the reception desk person will explain in Japanese. Here’s what she’s telling you:

• You may pet the animals if they allow you to, but do not pick them up

• No yelling or running (even children), because it scares the animals

• Do not feed the animals anything but the fruit provided, because it’s bad for their health

• When you go into animal enclosures, be sure to close the doors carefully behind you, so the animals don’t escape to the places where they’re not supposed to be.

Also (caveat from moi): Wear clothes that can be washed, because this:

And I also recommend packing a lunch and/or eating a big breakfast before you go, because Sayuri World is smack in the middle of nowhere. There’s a coffee stand in the park, but there’s really nowhere to eat real food for miles around, so be forewarned!

But is it all worth it? Yes, yes, YES! I’d say that on a scale of zero to Fox Village and Bunny Island, this rates a solid 9!

*Sayuri World is small and private and entirely supported by ticket sales, donations, and the owner, so it doesn’t have the kind of fancy landscaped habitats we’ve all come to expect at bigger zoos. The animals all looked happy and in good health and well cared-for (water always available, and every enclosure has enrichment structures and a place for the animals to retreat when they’re tired of people), but if you object to animals living in cages (however spacious) this place is not for you.