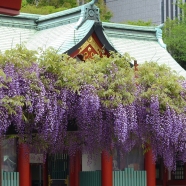 Where To See The Most Beautiful Wisteria In Tokyo

Posted by Jonelle Patrick on April 29, 2017 in Awesome Stuff To Do, Beyond Tokyo, Just...Beautiful, Seasonal Goodness | 7 Comments

It’s purple season again! Yes, the wisteria are blooming, and (did you even have to ask?) of course Japan has over-the-top displays of the good purple stuff. Peak season is mid-April to mid-May, so get thee to these spots right now to see the most eye-popping ones around…

Because mother of all wisteria

Because mother of all wisteria magically lit up at night

Because rare pink wisteria conveniently next to a reflecting pool

Because mother of all wisteria in all shapes and colors 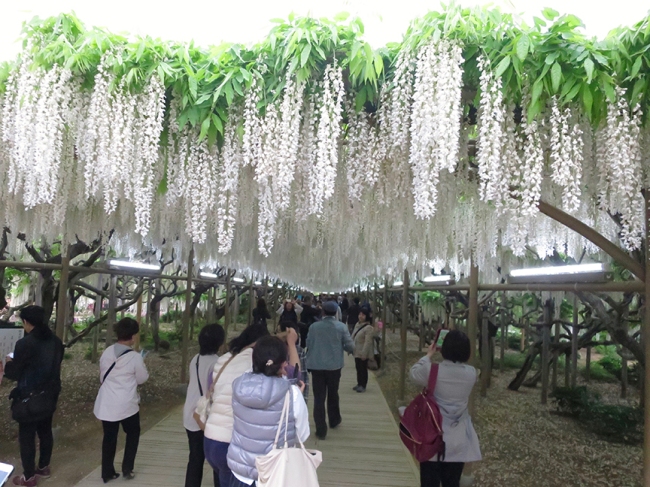 Because infinite halls of wisteria 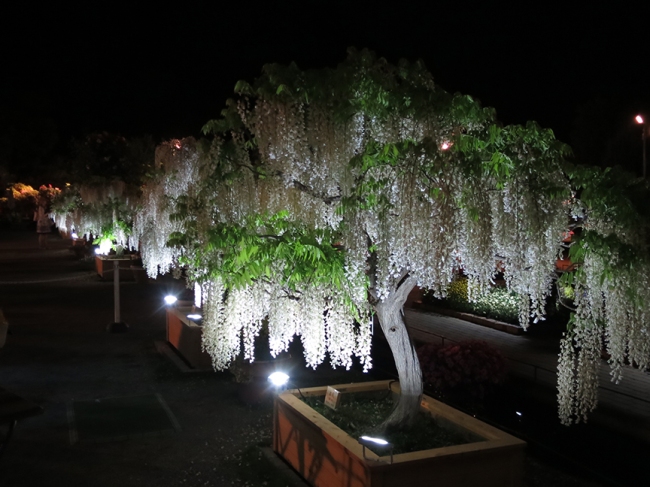 I admit that even if you totally stretch the definition of suburb, this park isn’t actually in Tokyo, but it’s so amazing, it would be wrong if I didn’t tell you to hop on a train and daytrip it if you can.

While you’re out near Ashikaga, a little further northeast is Hitachi Seaside Park, where the Baby Blue Eyes are also in full bloom. Conveniently close to the rolling hills of blue is an amazing display of wisteria:

It’s incredibly long, and progresses from white to pink to purple, with all the colors in full bloom at the same time 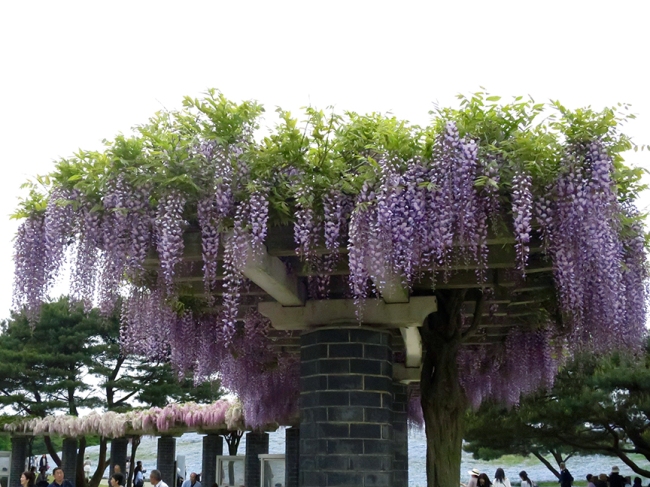 Here it is, from the other end

Hitachi Seaside Park is about three hours northeast of Tokyo, near Mito. To get there, plug your nearest station into the Train Finder or download a free Japan Travel mobile app to your phone (I use Navitime Japan Travel) with Ajigaura Station as the destination. There’s a free shuttle bus that runs every nine minutes between Ajigaura Station and the park.

Of course, you don’t have to go that far to see wisteria extravaganzas. There are quite a few awesome displays right in Tokyo. For example…

Dishing up masses of purple flowers since Edo-era artists were inking their woodblocks (see below), the Kameido Shrine has acres and acres of the stuff. It all blooms at once, and…well, see for yourself. 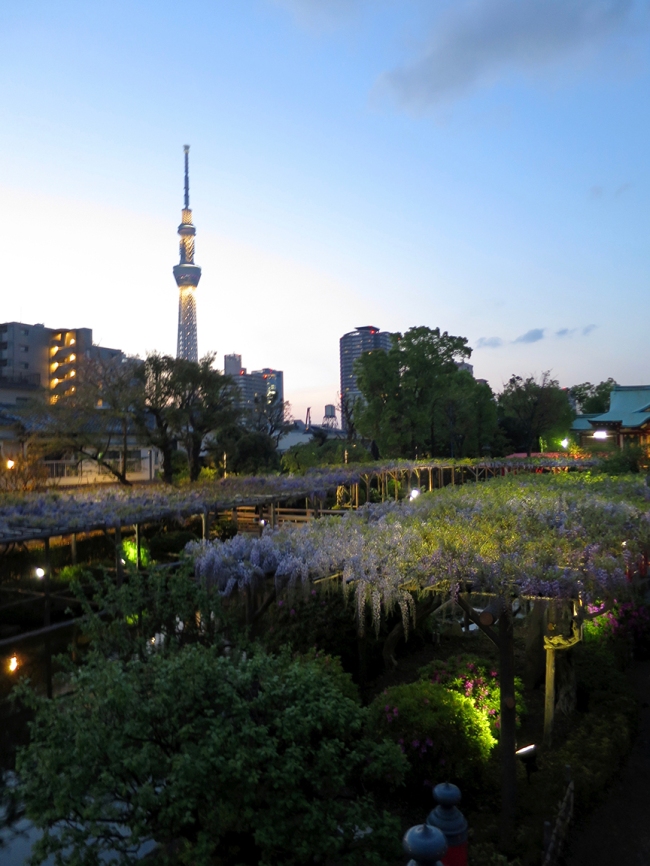 As you can see, the purple is strong with this one (this photo only shows about a quarter of it)

Plus, it’s lit up at night until midnight and it’s FREE (how great is that?)

You can’t really escape the looming Skytree thing at Kameido Tenjin, so it’s best to just give in and let it photobomb all your pictures. (At least it’s lit up in purple in honor of The Season, but still.)

Purple haze, as far as the eye can see

The trunks are pretty picturesque too. Weirdly, the ponds surrounding these don’t work very well as reflecting pools, but they do make it necessary to have…

Bridges. Red ones. Which look awesome with the purpleness.

Whether you prefer your wisteria light or dark, there’s plenty to go around 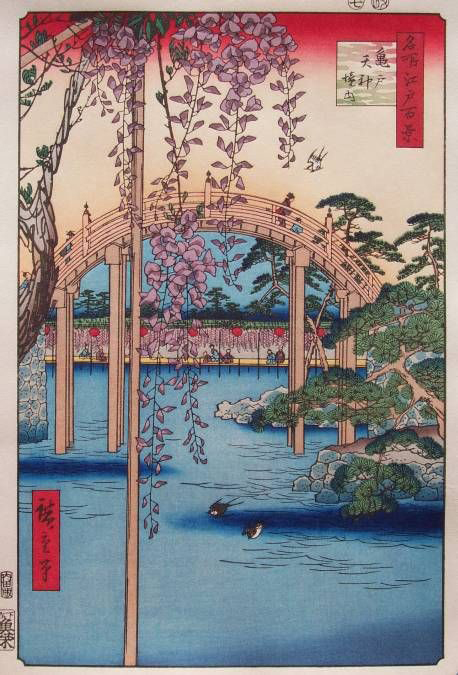 As you can see, they’ve been at it for quite a while. “Wisteria at Kameido” by Hiroshige, 1856

Smack in the middle of boring, corporate Akasaka, there’s a venerable island of shrine greatness. The Hie Shrine sits on a hill by itself, magnificently attired in red and gold. 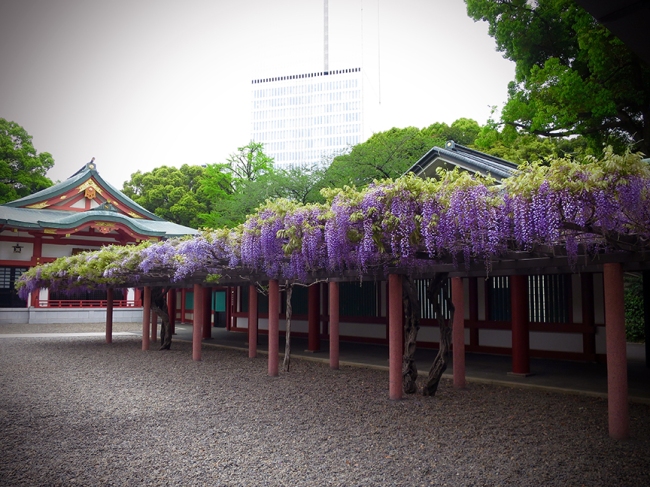 There’s just one rack o’wisteria at the Hie Shrine, but it’s a choice one.

The sheer exuberance of these vines just makes me happy

In the north end of Tokyo, Nishi-arai Daishi Temple is famous for its peony garden (which, if you’re lucky, will still be in bloom) but it also has an impressive pair of giant wisteria plants

Looks like a great spot to have lunch, doesn’t it?

It’s next to a nice pond with a waterfall

And because Boys’ Day is May 5th, the temple’s gigantic carp streamers will be waving in the distance

These next places have lovely displays of wisteria, set in gorgeous gardens. 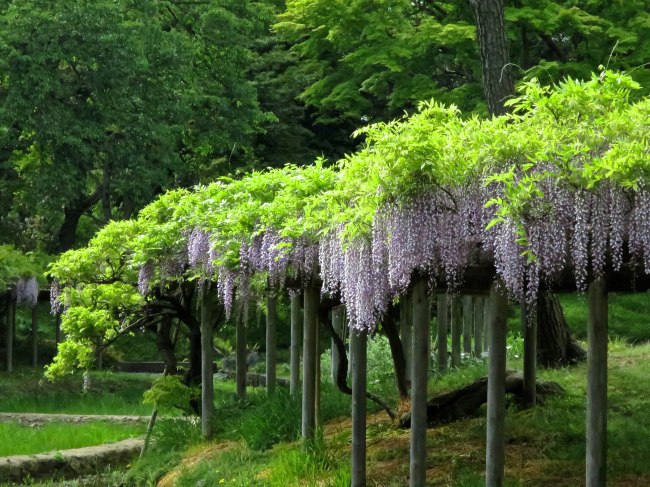 This garden is always uncrowded, even though it’s right next to Hamamatsucho Station. Although it just has one trellis of wisteria, it’s an especially nice one, and the peonies and early iris are also in full bloom right now. A stroll through the deep green of this exquisitely-designed garden is always soul-restoring.

The ancient vines at Kyu Shiba-Rikyu Garden shade a really nice picnic area right inside the gate, with a great view of the pond 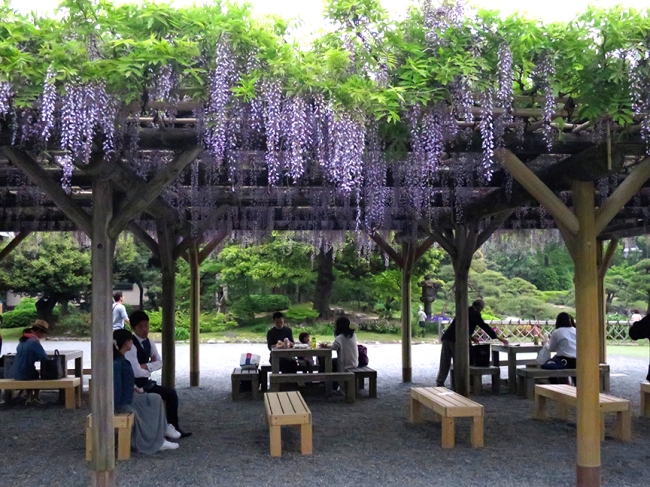 This variety of wisteria isn’t just satisfyingly purple, the flower cascades are a couple of feet long, so they hang down inside the trellis too

Super nice scenery all around