Home » Cute to the nth » Rice Of Unbearable Cuteness 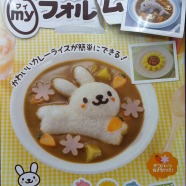 Although digging into this adorable bunny-shaped rice might be a bit like steeling yourself to whack the head off a Bambi piñata, who can resist making boring old curry into a dish of overwhelming cuteness? This handy rice mold set also includes a fork-a-baby-dolphin-to-death design and the rather more humane sunflower model.

If you’d like to visit a Tokyu Hands store the next time you’re in Tokyo, maps are on my website, The Tokyo Guide I Wish I’d Had.